In 2000 the Government embarked on modernisation of the key railway link between Kuala Lumpur and the North of Peninsular Malaysia. Emrail was given the responsibility for designing, constructing and commissioning trackworks for both EDTP 1 (2001-2009) and EDTP 2 (2009-2016).

EDTP 1, from Rawang to Ipoh, included electrification works, double tracking and alignment changes to the railway track. As a result of these upgrades, the track speed was doubled from 80 km/h to 160 km/h, enabling travel times between Kuala Lumpur and Ipoh of just over 2 hours compared to 5 hours previously.

The work scope under EDTP 2, from Ipoh to Padang Besar, additionally included design and construction of trackworks involving structures such as the swing bridge in Prai, 3.3 km twin bored tunnels, a 3.5 km marine viaduct, and 51 km of land viaduct over farm land.

Through these projects, Emrail achieved successful completion of over 1,000km of trackworks. Serving as a major freight boost to the KTMB network, EDTP 1 and 2 completed the modernisation of the railway link into Thailand. 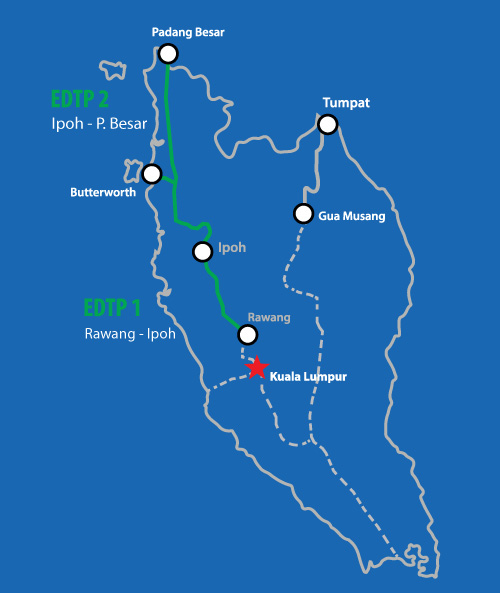